The Writing’s on the Billboard

Despite the occasional organised Offensive and Blitz campaigns, the bulk of BUGA-UP graffiti is done on an ad hoc basis, whenever people can fit it in.

For most people this means painting on billboards just before catching the train to and from work, or « painting the town red » at night or on their days off.

Billboard graffiti is so simple you can organise it around just about anything. Even if you paint only one billboard per week you’ll be costing the corporate pushers between $500 and $5000 per year, depending on your thoroughness. It’s a sad fact, but we’ve learnt through long experience that money is the only language billboard advertising companies understand. Nothing will get those ads down faster that if their profits are reduced by. escalating maintenance costs.

But even more important that this financial factor is the effect that the refaced ad will have on those who read it. At the very least you’ll be Speaking Up for Community Health – something none of our governments seem to care much about.

So now, just to show you how easy the whole operation is, BUGA-UP presents the Do-it-Yourself Graffiti Guide.

First, you’ll need to buy and test your equipment. Go to a shop (big chain supermarkets are the cheapest) and get your spray cans. Black and chrome are the most versatile colours, but red, blue, purple and white are also effective on particular billboards. Spraycans must be shaken for at least a minute prior to use. Always test new cans as some are duds.

You then find your tobacco and alcohol billboards and work out the easiest access and departure routes. Position somebody to watch for the rare cop who may happen upon you, and to chat with passers-by. Then, Go For It!

Try to break down the power of the billboard ad by answering it, looking at the space available and the way in which the words and images lend themselves to addition, alteration or comment. We’ve found humour to be extremely effective in exposing the advertiser’s real intentions – turning the ad’s message back on itself.

When you finish writing (avoiding spelling mistakes, the graffitist’s curse) you sign the billboard « B.U.G.A. U.P. » Bang! You’re a member with full entitlement to the Fighting Fund should you need it.

If the offending billboard proves too high to reach you have a number of options open to you:

1. GET A LADDER! This isn’t altogether satisfactory as you look rather conspicuous and any hasty retreat is made difficult.

2. BUILD A SPRAY CAN EXTENSION!

Obtain a broom handle or other solid, strong but light weight pole (Illust. A).
At one end cut out a wedge, half the width of the pole. Fit a fiat metal bar to the remaining wood (No. 2).
30cm from this end, attach a support clamp which the can will rest on (No. 3). Fit an angle bracket on each side of the pole, 20cm from the end (No. 4).
The spray can should slot between these brackets. Tie a length of plastic coated wire to the fiat metal bar (No. 2) and feed it through a hole in the support clamp (No. 3) and screw eyes attached the length of the pole (No. 5).
This wire when pulled, will press down the nozzle of the spray can and paint will spray out. An optional extra is the roll-top of a deodorant bottle, fitted to a support clamp (No. 6).
This will help maintain an even distance between the spray can and billboard (Illust. B). We’ve had enormous success with these extension systems. They’re a bit difficult to use at first, but ‘practice makes passable’.

3. CONSTRUCT PAINT BOMBS! Take one raw egg. With a needle drill a hole in the top of the egg, gently breaking away about 1/2 sq. cm of shell (Illust. C, No. 1). Insert the needle and stir up the yolk and white. Poke another hole in the same end of the egg, about 3 cm from the first hole (Illust. C).
Blow through the second hole so that the yolk and white come out the first hole (Illust. D). Have an omelette! Make up a mixture of 50% black, red, yellow, blue or fluorescent green oil-based paint and 50% thinner (eg. turps, petrol, kerosene). Alternatively, make up a solution of colour-fast dye, mixing it with a thickener such as cornflour over heat until you get a gravy-type consistency. Pour this mixture into a~thin-nozzled, screw-top bottle. Seal the second hole of the egg with a pasty mixture of flour and water or candle wax (Illust. E). Pour in the paint/ dye solution through the first hole (Illust. F) and seal it also. You now have a perfect-sized, semi-biodegradable missile. We’ve found these little beauties very effective.

One word of warning. Contrary to popular myth, the worst time to graffiti on billboards is between 10pm and 8am. During this period there are proportionately more police out on the road than at any other time, and often they haven’t got anything better to do than arrest you. The majority of BUGA-UP arrests (small in number compared to the number of billboards that have been refaced) have been made after midnight.

Well, there you have it,

See you on the billboards. 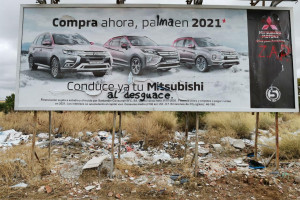 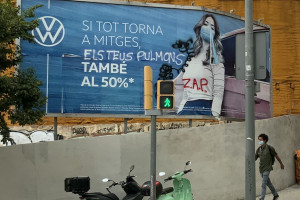 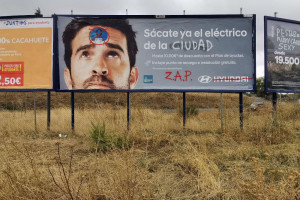 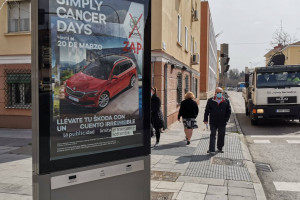 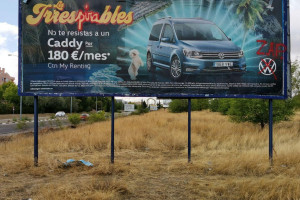 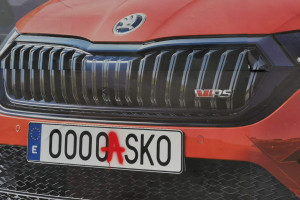 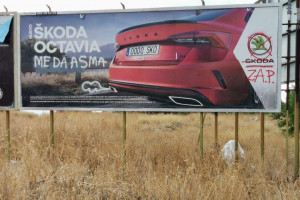 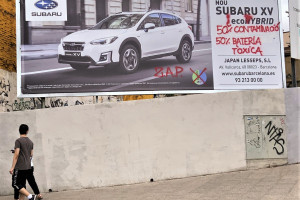